I recently had an opportunity to work with a preproduction sample of the new Fujinon XF 33mm f/1.4 R LM WR, thanks to our local Fujifilm sales rep. This new lens could be considered a replacement for the venerable XF 35mm f/1.4 R, the original fast “normal” prime from back when the X-Pro1 first came out. However, not only is the focal length ever so slightly different, but it is not actually a replacement since Fujifilm is not discontinuing the older XF 35mm. Indeed, there are many fans of the old 35mm f/1.4 since it has quite a wonderful “character” for portraits, even though it is not the fastest at focusing, nor is it weather resistant. 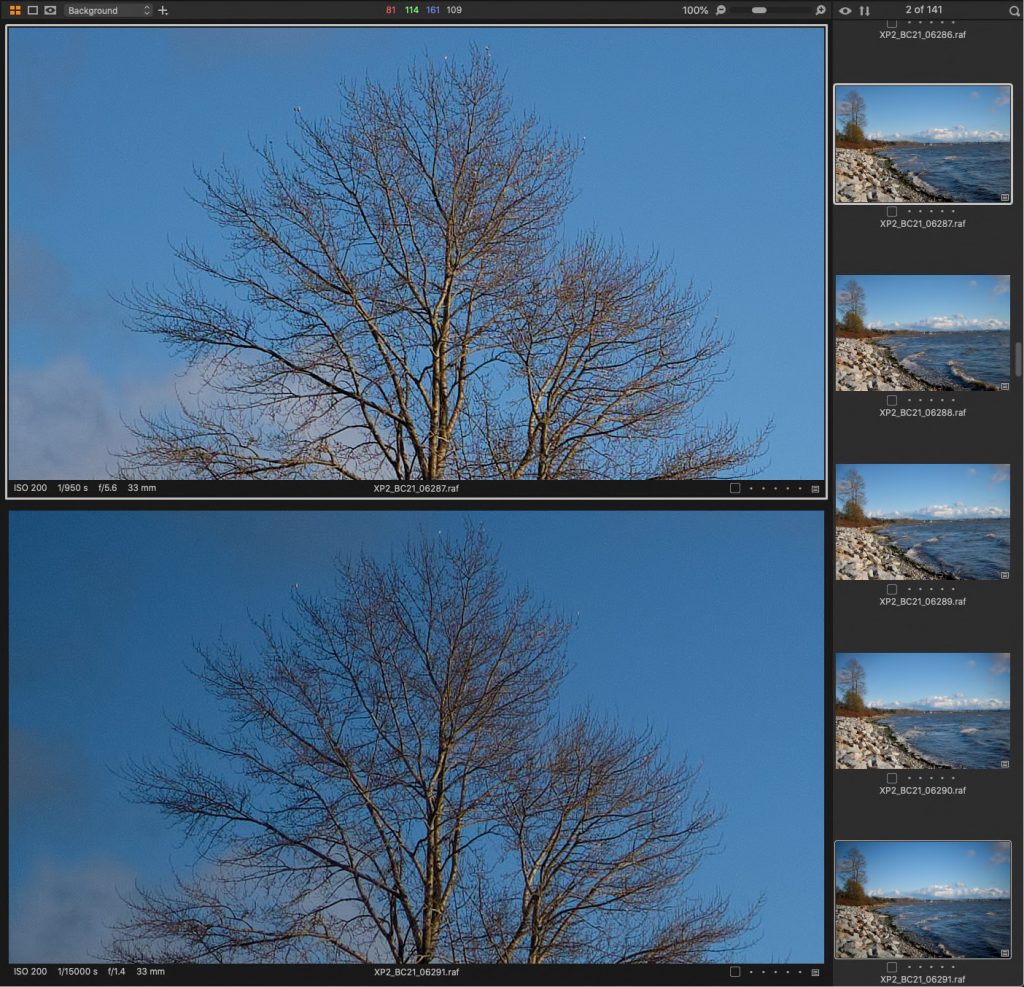 The new XF 33mm is in many ways similar to the new XF 18mm f/1.4 which I reviewed previously. These new lens designs are geared towards future, high megapixel X-system cameras and feature remarkably well corrected optical systems. Like the 18mm, the new 33mm seems near tack sharp into the extreme corners (click on the above sample), even when shot wide open at f/1.4 and has minimal optical distortions, although it certainly does suffer from some vignetting at the widest apertures, which you can also see with the above sample.

I will note that the preproduction sample I had suffered from a little bit of decentering which created slightly inconsistent corner sharpness (extremely rare in a production Fujinon lens though), so the above top-left corner actually turned out to be the sharpest of the four when shot wide open, which I did not notice until after I examined other tests. This was the only thorough corner sharpness f-stop test sequence I shot though. It could very well be that the corner sharpness at f/1.4 might actually be slightly worse in a perfectly assembled production copy with perfectly entered optics, or then again, it could be the same or even slightly better. This is why manufacturers don’t like reviewers to show full resolution images from preproduction lenses and why I won’t be showing other full-resolution shots either. Note that based on my experience with Fujinon lenses, I do expect a production copy will be overall improved compared than the one I shot with.

The build quality is very solid and the feel of the aperture ring is fantastic, with very well defined and crisp detents. Thirds stops have a slightly lighter detent than full stops, which most other Fujinon lenses also have, but the crispness of the detents means that it was very obvious on this lens and made using it a real pleasure. The lens has a fast Linear Motor (LM) autofocus mechanism, and its WR rating means it features a weather-resistant design. The bokeh quality, or quality of its background blur was good, with quite smooth out-of-focus specular highlights that may be just a little smoother than the older XF 35mm f/1.4 R, which has just a touch more outlining… but is still considered to be rather good.

So that brings me to the big question: is the new XF 33mm f/1.4 lens truly superior to the much older XF 35mm f/1.4? From a build quality and focus speed standpoint, it most certainly seems to be. As far as corner to corner sharpness at the widest f-stops, I am nearly certain it is much better than the older 35mm, with my only uncertainly being the preproduction nature of the sample I tested. Being that I only have a 24 MP sensor on my X-Pro2, of course I cannot judge whether or not the new lens is much better beyond 40 MP than the old one, but I have to presume it will be. However, I would say that stopped down to f/2.8 and beyond, there is pretty much no difference in corner to corner sharpness compared to the older lens, at least on current 24 to 26 MP bodies.

The other thing I noticed is a slight bit of purple/red fringing wide open along very high contrast edges when the lens is shot wide open, and in that way it is similar to the older lens. This can be seen on the overexposed highlight glare spots on the metal statue of the man at the end of the sample gallery (direct link to shot – opens in a new window or tab). Once again, the preproduction nature of the lens means that I cannot be sure a production version will still have that issue? Stopped down even a little, the fringing pretty much disappeared on both lenses. Barrel distortion and chromatic aberrations are virtually nonexistent, like they were on the older XF 35mm as well. As far as that somewhat hard-to-define measure of a lens’ “character”, is this new one better than the old? I honestly feel that both lenses are superb and couldn’t really see anything on the old lens that would make me rate it more highly, although in all honestly, I did not shoot a large number of side-by side comparison either. They simply are both superb lenses in my view.

In any case, like the recent Fujinon XF 18mm f/1.4, this new XF 33mm f/1.4 is truly a wonderful lens, with the promise of sharp photos even beyond 40 megapixels. I am eagerly awaiting the new upcoming Fujinon XF 23mm f/1.4 R LM WR as well, which is slated to ship early next year and promises the same degree of image quality.

So… since I own the older XF 35mm f/1.4, will I be switching to the new lens? Hmm… I must say that I am still very happy with my XF 35mm f/1.4. I am generally a fair weather shooter, so the lack of weather sealing isn’t a big deal for me, and since I usually shoot stopped down for anything other than portrait shots, the wide-open corner quality quality isn’t often an issue on the older lens either. However, my partner is wanting an upgrade over the kit lens on her X-E3, something with a bit more character and ability to isolate her subjects, so she may well take my older XF 35mm, in which case I most certainly will be getting the new XF 33mm f/1.4 for myself!

If I decide to buy the XF 33mm f/1.4, or get my hands on a production lens to more throughly test, I will update this review with further comments.

To buy one of these for yourself, click here!

END_OF_DOCUMENT_TOKEN_TO_BE_REPLACED

Last month, Fujifilm announced the latest in their GFX series of medium format digital cameras, which has been designated the GFX 50S II, as well as a few news lenses. You can read about it in our October newsletter here: Beau Photo Newsletter – October 2021 I recently had the chance to briefly try out... 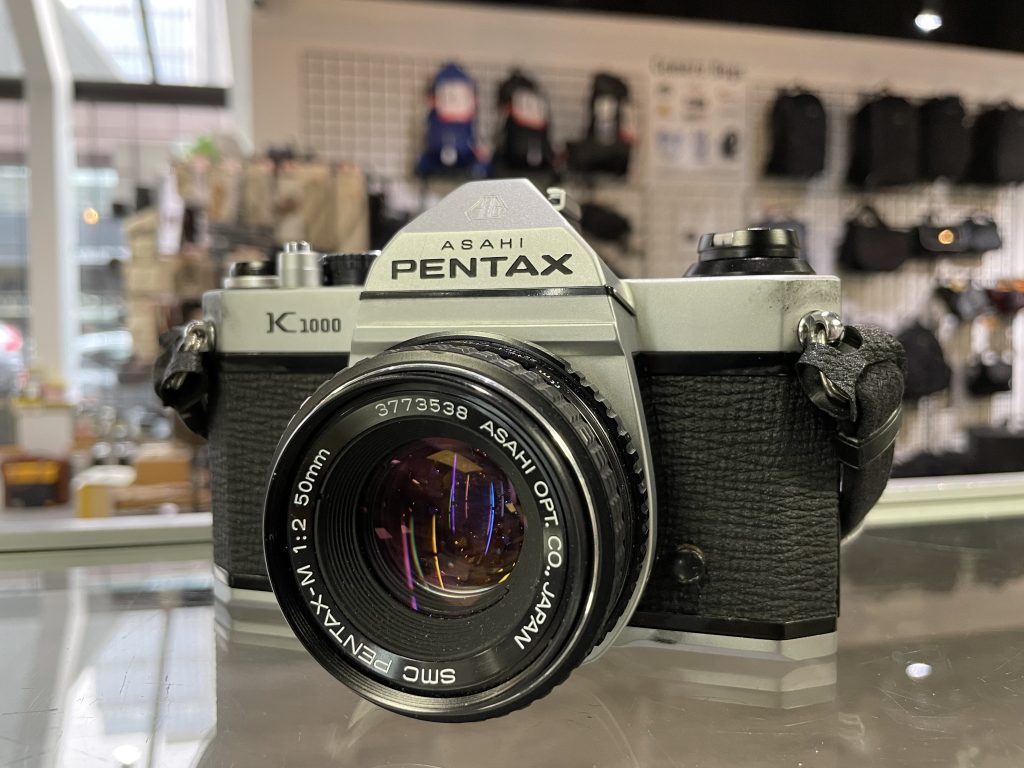 END_OF_DOCUMENT_TOKEN_TO_BE_REPLACED

The Pentax K1000 has become well known over the past three decades as one of the best cameras for people looking to get started in photography. This is mainly due to how simple it is to operate. There are no frills when it come to features. The K1000 was introduced in 1976 as the basic,...