With the importance of trying to do things in a more sustainable way and lessen our impact on the earth, it might be time to look at our darkroom practices. It’s difficult to think that the thing we love to do might be having a negative environmental impact, but there are ways we can tread a little more lightly on the planet without giving up time in the darkroom.

Let’s start off by saying that the answer is not necessarily to go digital! There are a great number of articles that argue either way on whether digital or film is more sustainable, and this is not one of them! Instead, we will look at things you can do to create analogue images more sustainably.

Ilford has 35mm film in a bulk roll that is 100′ long. It might seem like a lot of film, but it’s a good option if you want to share with friends, or have a favourite film you shoot a lot of. You can get bulk rolls of Ilford FP4 Plus, HP5 Plus, Delta 100 and Delta 400. We sell bulk film canisters and bulk film loaders as well. The plastic cassettes are reuseable so you are saving packaging and film canisters. Get a new bulk film loader by LegacyPro, or select from some used ones for $25 – $30. Bulk loading has the advantage of rolling film in whatever length you want, so you could make short 12 exposure rolls for testing or a nice 35 exposure roll that will actually fit properly in your negative sleeve without that leftover frame! Have a ‘rolling party’ and invite your friends! We hear it’s legal now.

Most people buy film pre-rolled in individual packages. This is a good option if you want to try different films, or can’t get your favourite film in bulk. The drawback is that there is more packaging to deal with, but quite a lot of it comes in paper boxes, and plastic canisters. Recycle the paper, and re-use the canisters. They are perfect for holing little collections of things, or for paints, or whatever you can dream up. The plastic wrap on many 120 films can also be recycled, check with your municipality for their recycling guidelines. If you develop your own film, you can recycle the metal cassettes and plastic spools.

The chemicals used to process film are one of the main subjects when talking about the environmental impact of shooting with film. There are some toxic chemicals that have been used, and are often still being used in the darkroom. These include hydroquinone (HC-110, Dektol, Microphen), metol (D-76, Perceptol), and pyrocatechol (pyro developers), with the pyro developers being on the higher toxicity side. All developers are used diluted so the quantity of chemical is reduced, though if you are using the pyro developers, make sure you know how to properly dispose of them. Less toxic are developers made with phenidone and/or ascorbic acid (Xtol, Black White and Green) and are a good option. You can also make your own developers out of fairly common and easily obtainable ingredients. See the blog post “Experiments in Developing Film With Chocolate” to find out how you can use plant based developers to process your film!

We have posted before about Flic Film, a small company in Alberta that manufactures more environmentally friendly chemicals. See our previous post here – https://www.beauphoto.com/an-introduction-to-flic-film/ and a quick look at the Black White and Green developer in our August 2021 newsletter here – https://www.beauphoto.com/wp-content/uploads/newsletters/news2021/aug2021.pdf

Flic Film makes everything you need for black and white, ECN-2 and C-41 processing, as well as a paper developer.

The purpose of stop bath is, as the name suggests, to stop the development reaction. Most developer is alkaline, and stop bath is acidic, neutralizing the developer on contact. Commercial stop bath is usually citric acid or acetic acid with a chemical that acts as in indicator so you know when it is exhausted, which is very helpful. Some people believe that using a water rinse instead of a stop bath is more environmentally friendly, and it will stop the development, just not as abruptly as an actual stop bath. Others feel that using a stop bath, but in a more dilute form than the bottle calls for, will save water, and also extend the life of the fixer. You can also make your own stop bath with a capful of vinegar in water, eliminating the need for a use-specific purchase of a bottle of stop. Use a pH indicator to see when your vinegar water has neutralised and you need to dump it and mix more. If you decide to use stop bath or vinegar water, it is a good idea to fill your tank once with water and pour it out just before the fix, preventing chemical transfer to your fix.

Fixing film is another point that poses an environmental hazard. When fixer is used to clear the unexposed silver halides from your freshly developed film or paper, it becomes saturated with silver. Used fixer should not ever be dumped in the drain. Silver is very toxic to aquatic life and is not usually removed with wastewater treatment. Ask your favourite lab if they will take your fixer for recycling. They may charge a fee as it costs them money to run their silver recovery machines. Yes, silver is recovered from the used fix, but there isn’t usually enough in your bottle to make it valuable to you.

The washing stage is another step that has a higher environmental impact. Depending on the method you are using to wash your film, you may be unnecessarily wasting water. When washing, it is important that the water exchanges in the tank, but this doesn’t have to happen as often as what a tap running at half might give you. A slow flow will do, and use a wash hose so the water runs through the tank and across the film rather than just into the top and over the edge. Ilford describes an alternative method of washing that uses considerably less water. From Ilford: “Fill the tank with water at the same temperature as the processing solution and invert it 5 times. Drain the water away and refill then invert the tank 10 times. Finally, drain and refill the tank again then invert it twenty times before draining.”  – https://www.ilfordphoto.com/beginners-guide-processing-film/

Using a Lab to Process Your Film

If you aren’t able to process your film at home and need to take it to a lab, consider going by bike, walking, or going on transit! Taking the car probably pollutes as much as any processing you might be doing.

This is not meant to be a definitive guide to shooting with film more sustainably, rather it is a starting point to think about ways you can reduce your environmental impact in your analogue workflow. There are many differing practices and thoughts out there so do some research and find what works best for you. Next time you decide to shoot and process a roll of film, consider trying some of these suggestions. If you have something that helps reduce your environmental footprint, let us know!

END_OF_DOCUMENT_TOKEN_TO_BE_REPLACED

Experiments in Developing Film with Chocolate 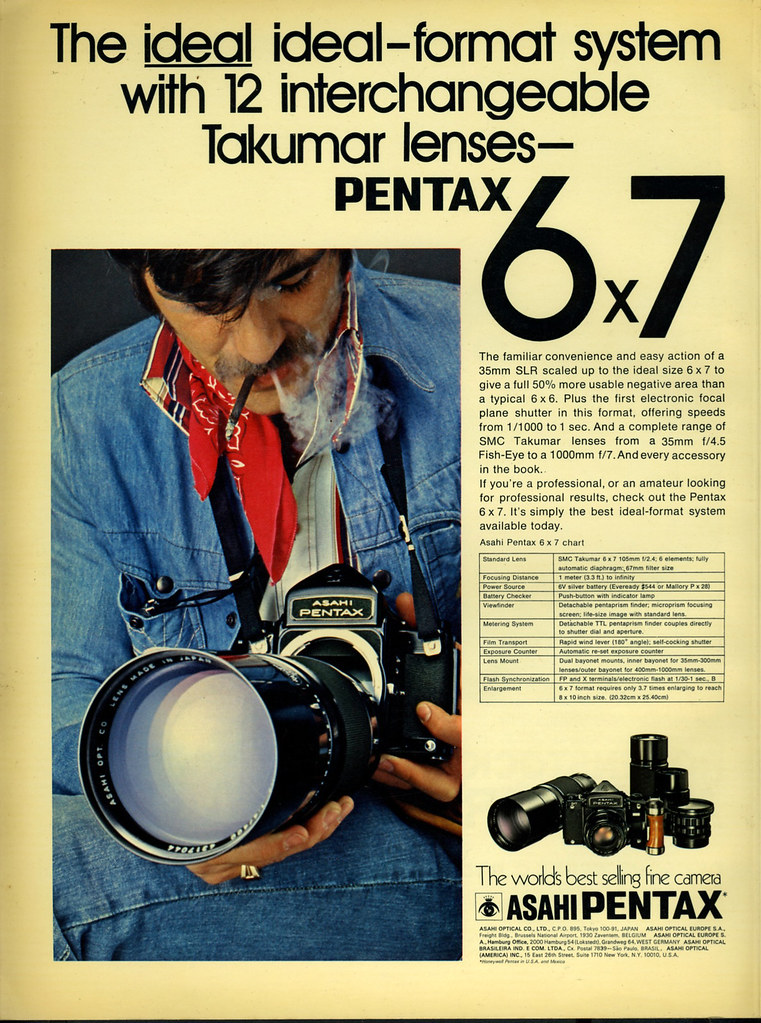 END_OF_DOCUMENT_TOKEN_TO_BE_REPLACED

Should you buy a Pentax 67?

No.   EDIT: At the insistence of my manager and colleagues, I will list some reasons. It’s too heavy. It’s too loud. It’s not pretty. The lenses are amazing, but...