In the 1980s and 1990s, Fujifilm and Kodak were very much like the yin and yang of photography’s major players. With Kodak’s Ultramax there is Fuji’s Superia. With T-Max there is Neopan. With Ektachrome there is Provia. And of course with Portra 400 there is Pro 400H. 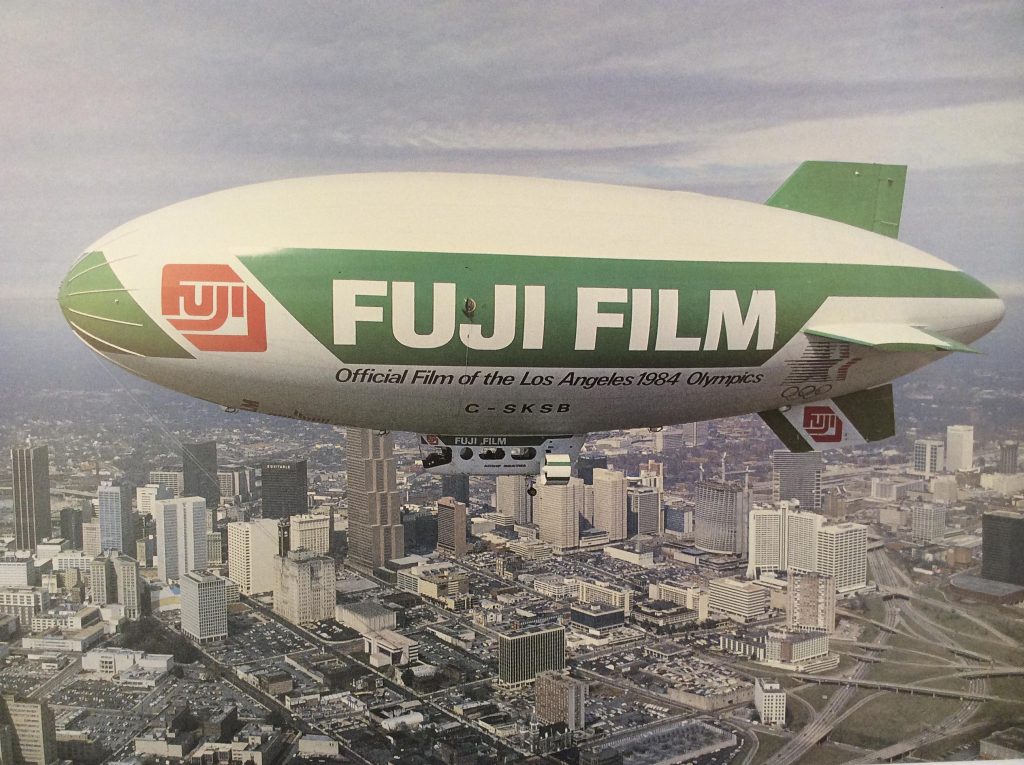 Remember those Fujifilm airships that showed up on Kodak’s doorstep?

Fuji’s Pro 400H is their professional medium speed colour negative film. Compared to Superia, it has much finer grain, more neutral colours as well as a lot more tolerance for over or underexposure. It lacks the warmer colour palette that Kodak’s film tends to offer, but at the same time also lacks the greener tone that Superia is known for. It is a lot softer and low in contrast as well. When used well, it gives superb results that ranks it as one of the best colour negative films.

This is especially evident in medium format, as the photos provide an intangible, three-dimensional quality to them. Especially when overexposed, there is a light and airy element to them that is favoured by plenty of portrait photographers. This is evident by the type of people that we see buy this film here at the store, as we sell a lot of Pro 400H to professional wedding photographers in particular. In fact, I think it’s one of the few films here at the store where the 120 format routinely outsells the 35mm format. This, as far as I can tell, is for two reasons. One, is that it happens to be the cheapest colour film to come in 120 at under $10 and two, when professional photographers come and purchase it, they tend to buy propacks of them in bulk. And for some reason, it looks almost completely different in 120 than in 35mm!

For the longest time, I was indifferent to Pro 400H as I mainly shoot in 35mm. I’ve tested it quite a bit in the past, overexposing and underexposing it in all sorts of conditions. My experience with it have only been with 35mm, and I was never particularly enamored by the neutrality of it. It lacks the obvious warmth that has made Kodak’s Portra so beloved. In fact, if I was shooting indoors, I would choose Portra 400 over Pro 400H. But now that I’ve shot Pro 400H outdoors more this past summer and winter in 120, I’d have to say, I much prefer it over Portra 400 in natural light.

I’ve shot the film in most formats, from 6×4.5, 6×6, and 6×9 to of course, 35mm. While Pro 400H is said to exhibit some more grain than Portra 400 I much prefer a little grain over a purely clean negative as it provides a little texture to the images. With medium format, it is hardly noticeable anyways. Even at 6×4.5 it’s incredibly sharp. I am pretty convinced that Pro 400H is one of the film stocks where I much prefer it in 120 than in 35mm.

But don’t be mistaken into thinking that Pro 400H is an easy film to shoot. It’s one of those films that loves light, as in, it really loves light. Underexpose even slightly and say goodbye to your shadows. Here is perhaps where it falls behind slightly. Pro 400H underexposed one stop looks like Portra 400 underexposed 2 stops. But overexpose it 2-3 stops and wow does it shine. It even makes photos look more saturated than normal somehow while still maintaining accurate colour reproduction! This is why wedding photographers favour Pro 400H. They will often overexpose it to get that dreamy and airy look.

But of course, much of what is loved about Portra 400 that Pro 400H lacks is that distinctive “film look” that so many people lust after these days. It’s a pity that that Portra 400 has become the de facto film profile that so many other film stocks are put against, as it only serves to discount what all those other film stocks have to offer. Pro 400H is, on paper, the only direct rival to Portra 400 but outside of professional circles has nowhere near the same amount of attention. One would expect it to at least garner a similar amount of attention but sadly that is not the case. 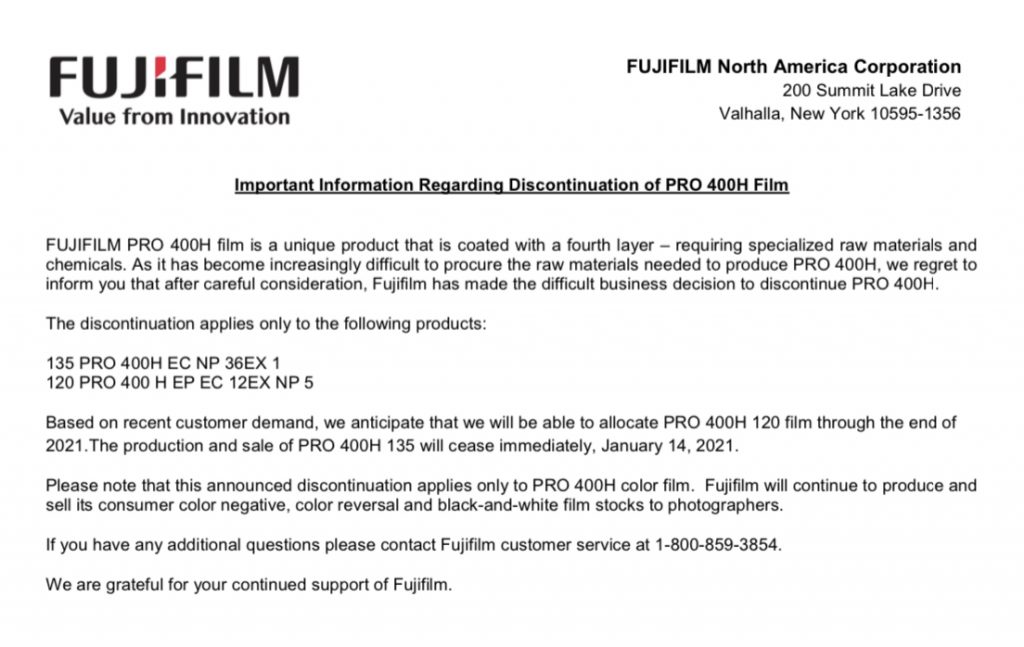 And while some of us did see this coming, Fujifilm finally announced the discontinuation of Pro 400H last night. The cries and whimpers of many among the analog community were heard worldwide when the news broke and the press release recited. Our fears were confirmed this morning when we got the official word from Fujifilm Canada. And indeed, we sold out of all of our stock of the film this morning an hour after we opened.

Fujifilm cited the difficulty of obtaining raw materials and chemicals for their illusive fourth layer that makes Pro 400H so unique. This isn’t surprising amid the COVID-19 pandemic, as many film manufacturers were having supply difficulties. They also claimed that their existing stock were depleted faster than expected due to rising demand over the past few years. Not surprising, seeing how Kodak and Ilford has been seeing sales go up. Hopefully this won’t spell the end for Fuji’s slide film, too. Reportedly they’re still making Pro 160NS in 120 for the Japanese market.

However, fingers crossed they will simply reformulate the film and bring back a new version sometime soon. This was what happened with Velvia and Neopan Acros. Especially considering how demand for Pro 400H is at its highest in a long time, it’s odd timing for them to be discontinuing it completely. It is one way to stay optimistic.

Still, we’re all incredibly sad by this news. Now our only options for 120 colour film is Kodak and perhaps Lomography. What will wedding photographers be shooting now? Portra 400? Its not the same! The truth of the matter is, colour film is incredibly complicated to produce. It is quite the challenge to formulate, which is why we have been seeing more B&W films from upstart manufacturers than colour films. Could this spell the start of the end of colour film? I doubt it (in the short term anyways) but you never know, there are companies trying to bring back some colour films like Orwo and Ferrania but for now, Kodak seems to be our only main option. Ah well. Support your film producers!

In the meantime, here’s some photos we’ve taken in the past in various formats, from half frame to 6×9. 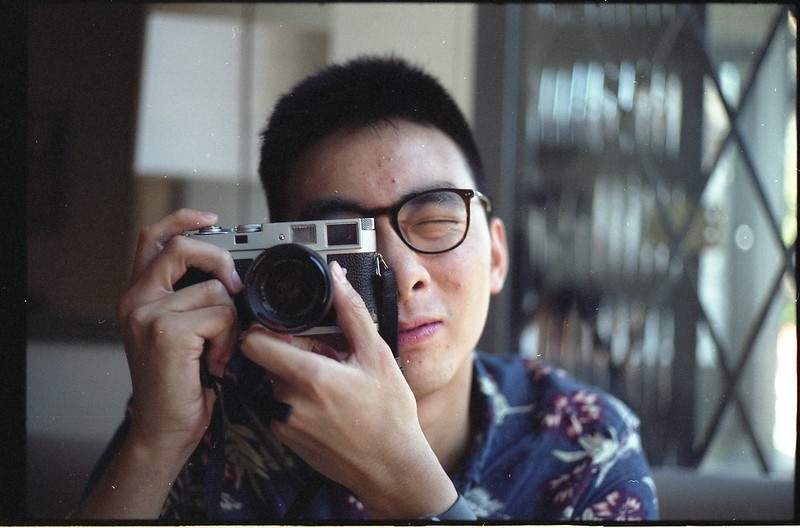 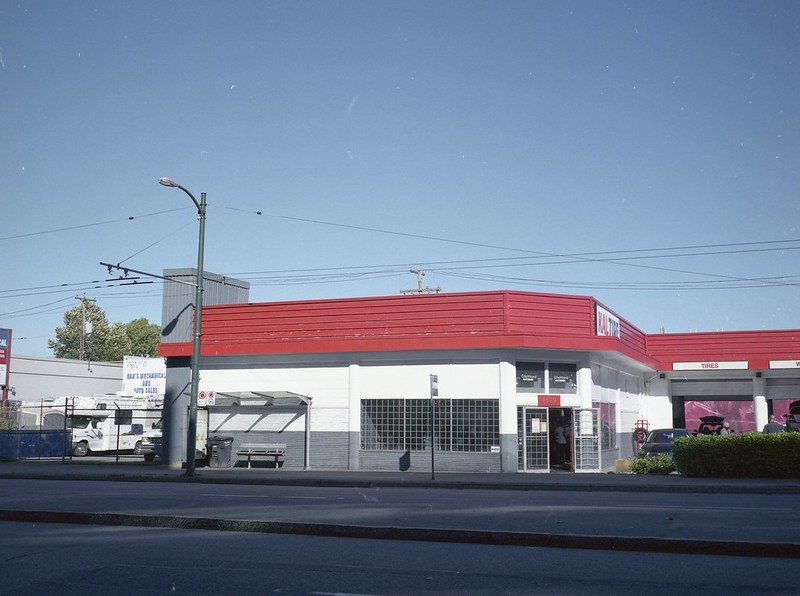 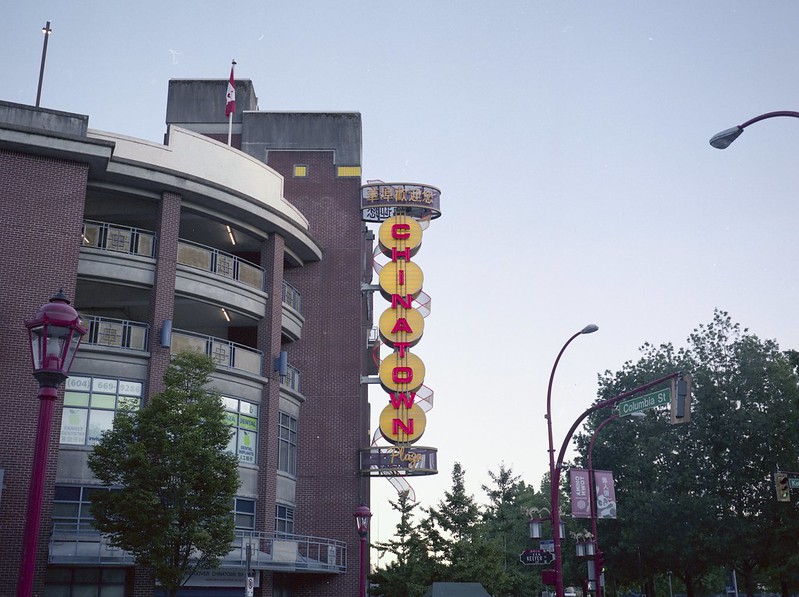 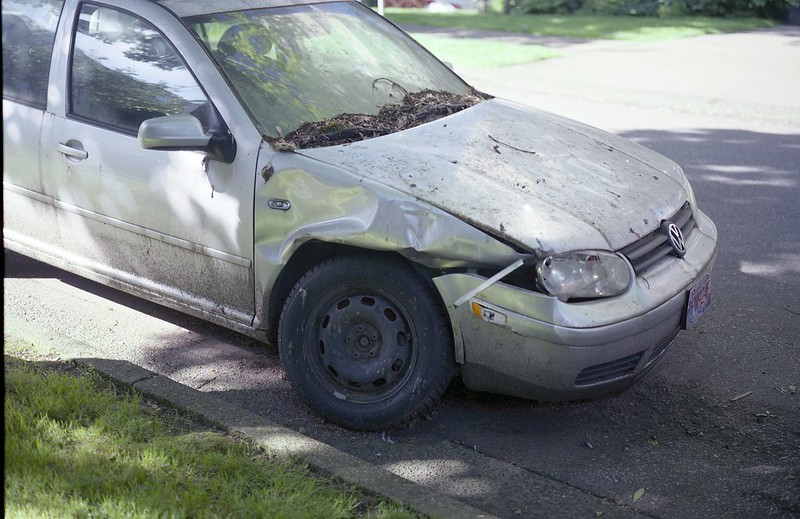 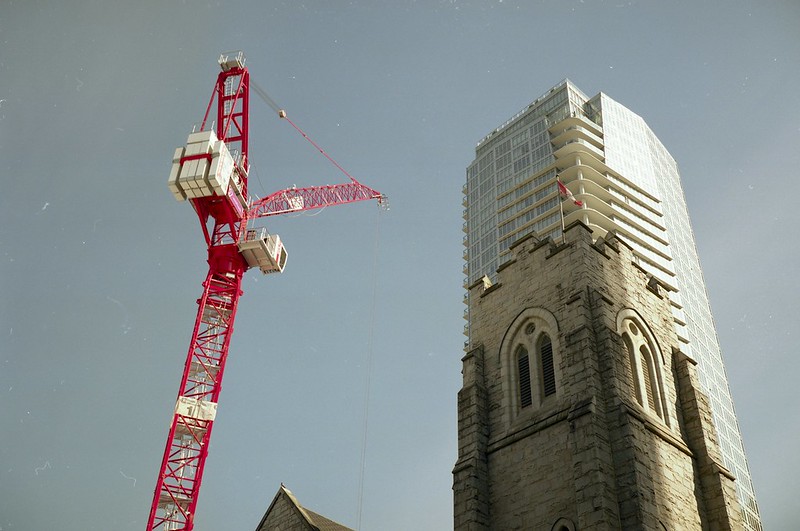 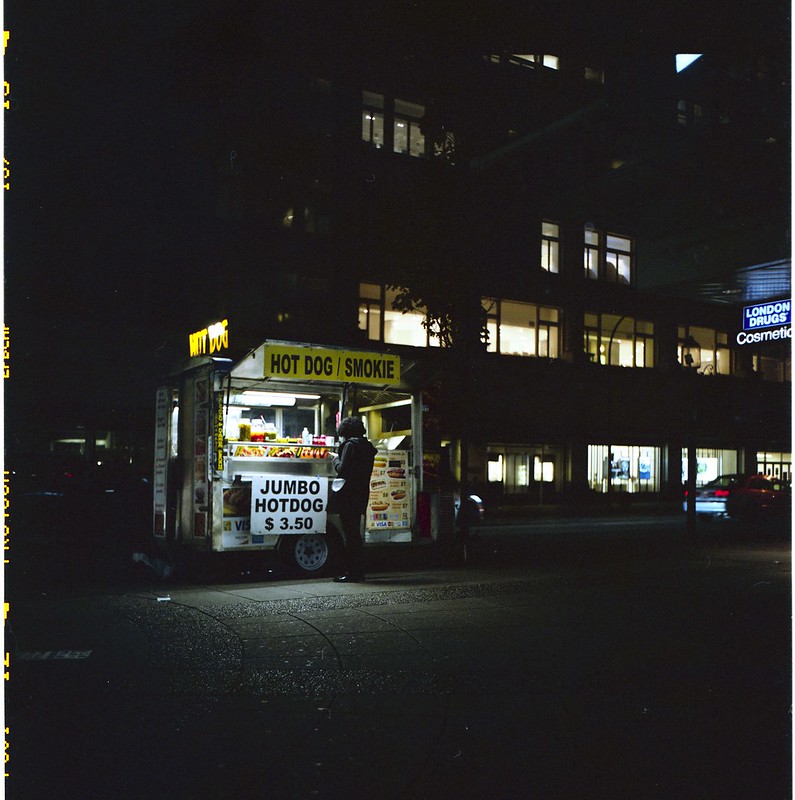 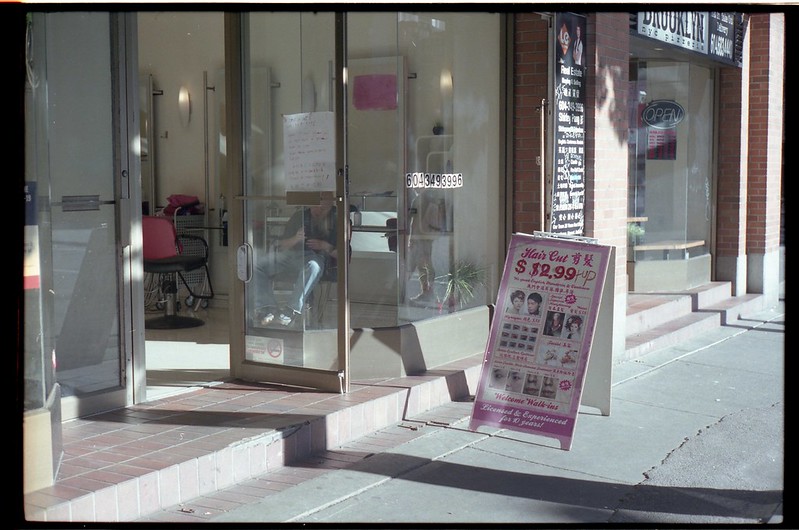 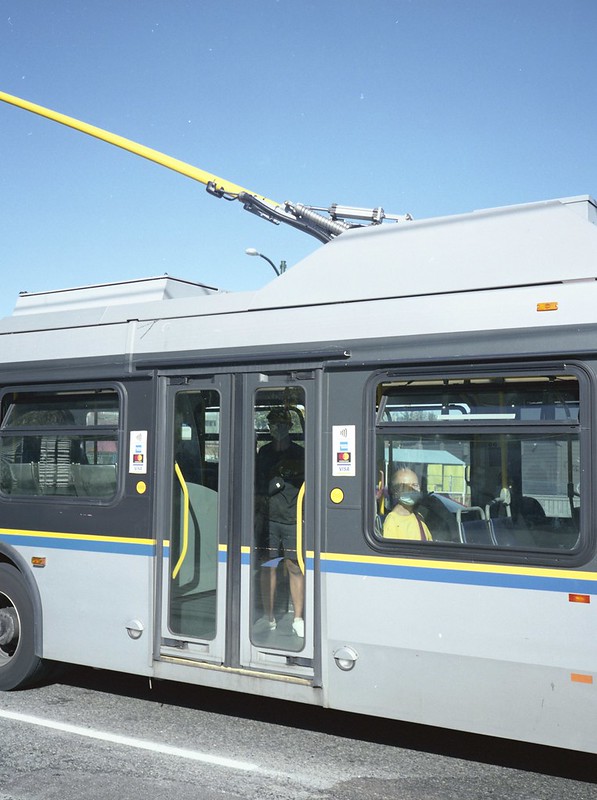 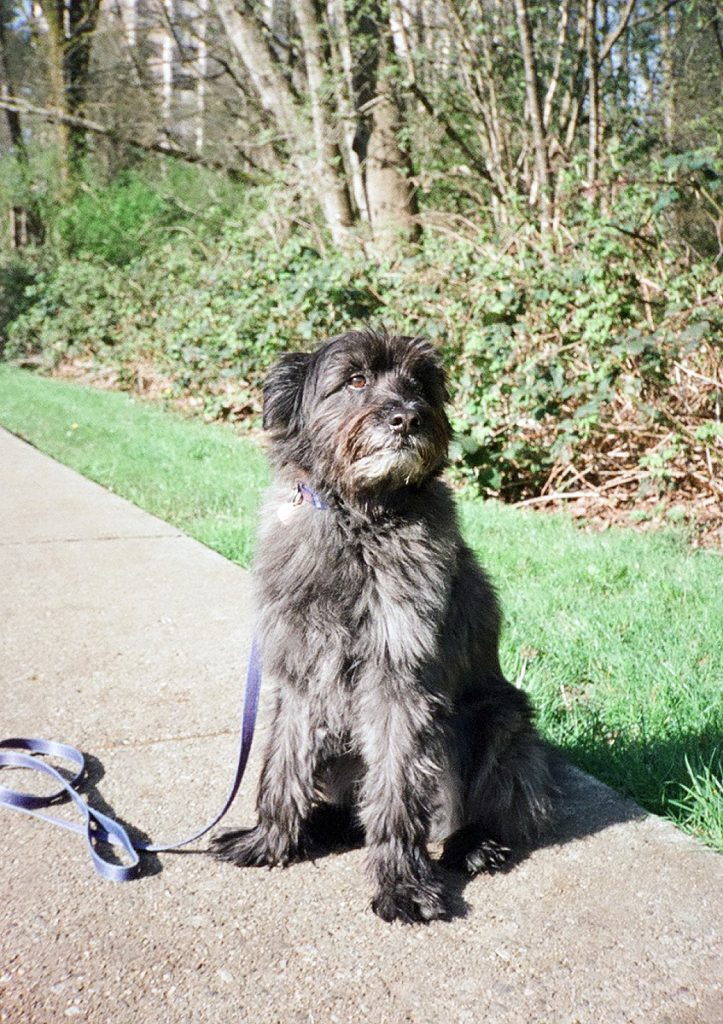 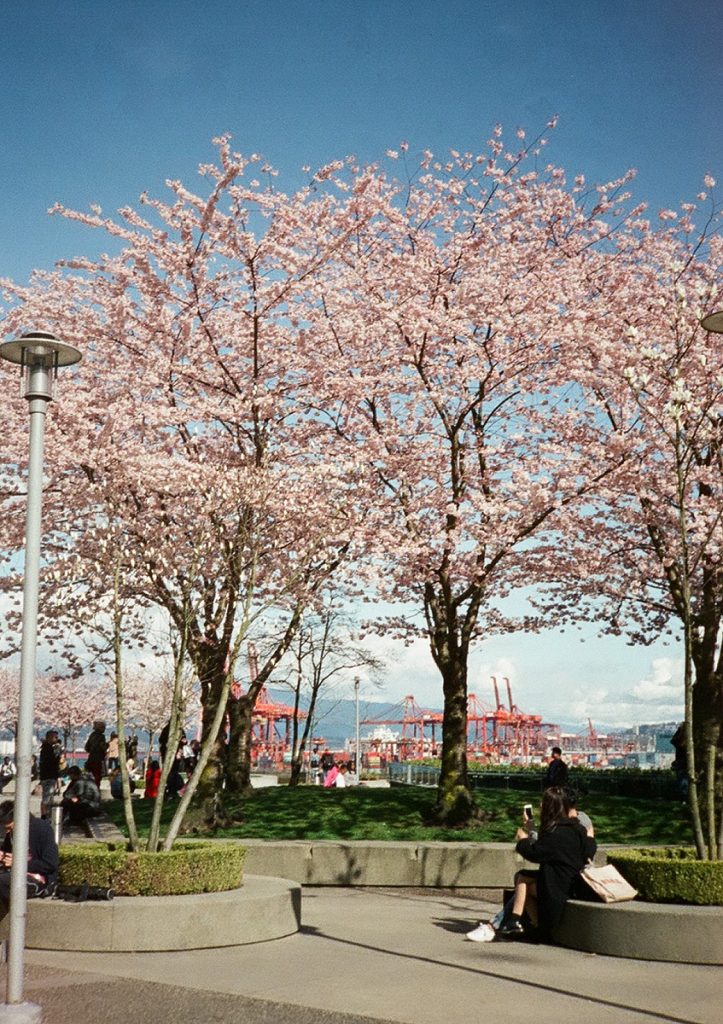 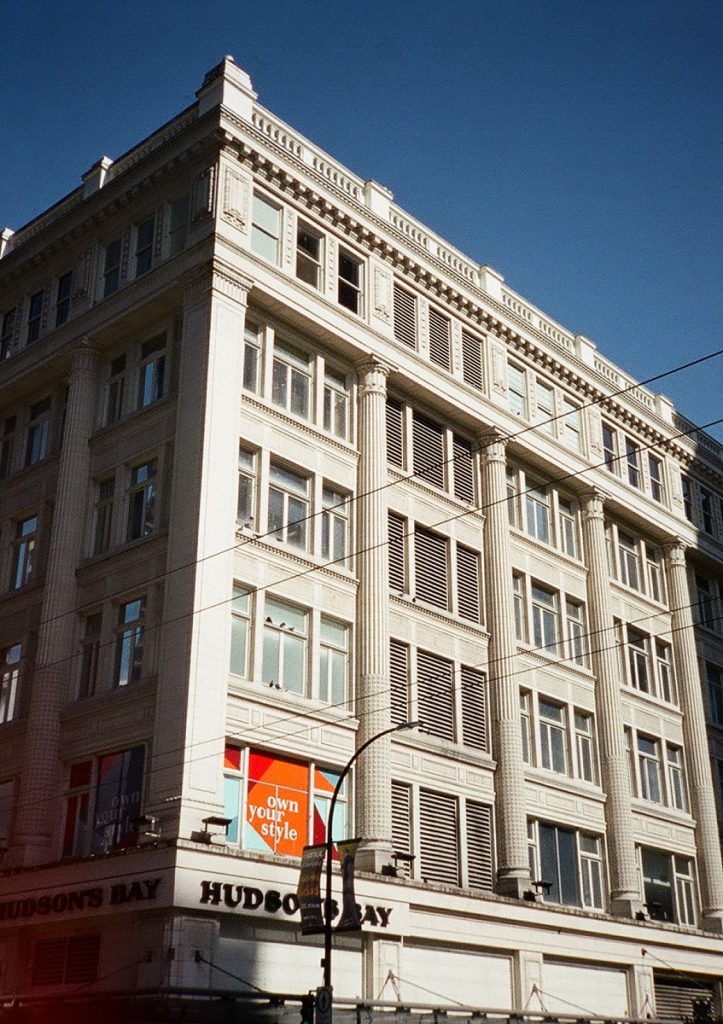 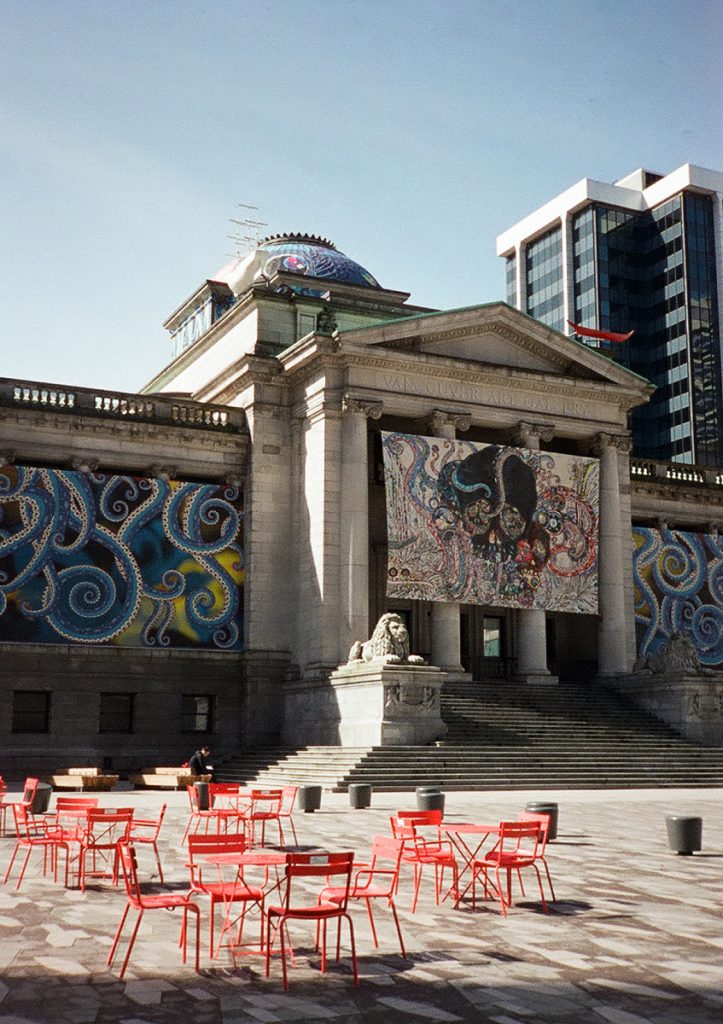 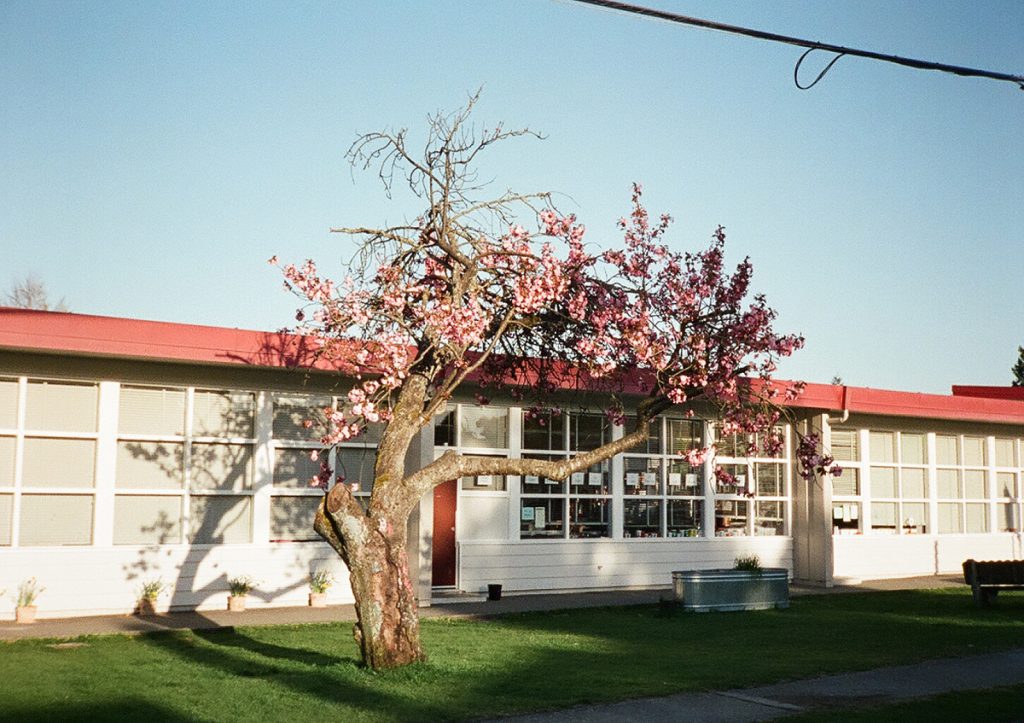 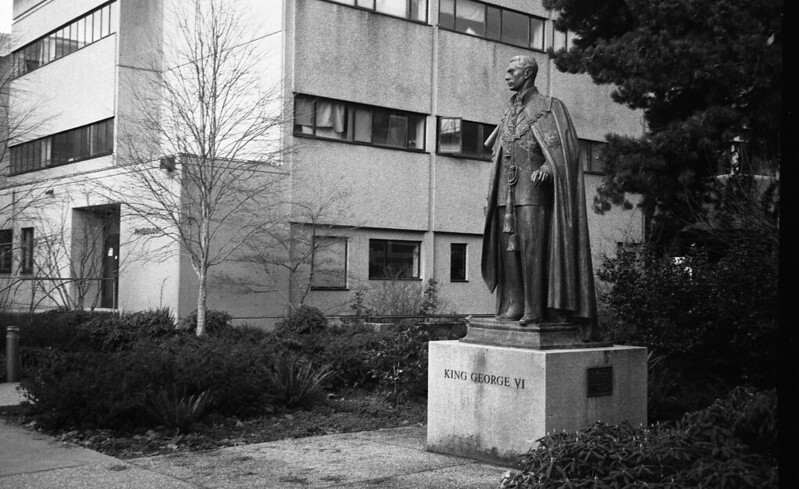 END_OF_DOCUMENT_TOKEN_TO_BE_REPLACED

Happy new year! 2021 has been off to an interesting start, so we figured why not start it with not just film, but a whole bl**dy camera? After all, if... 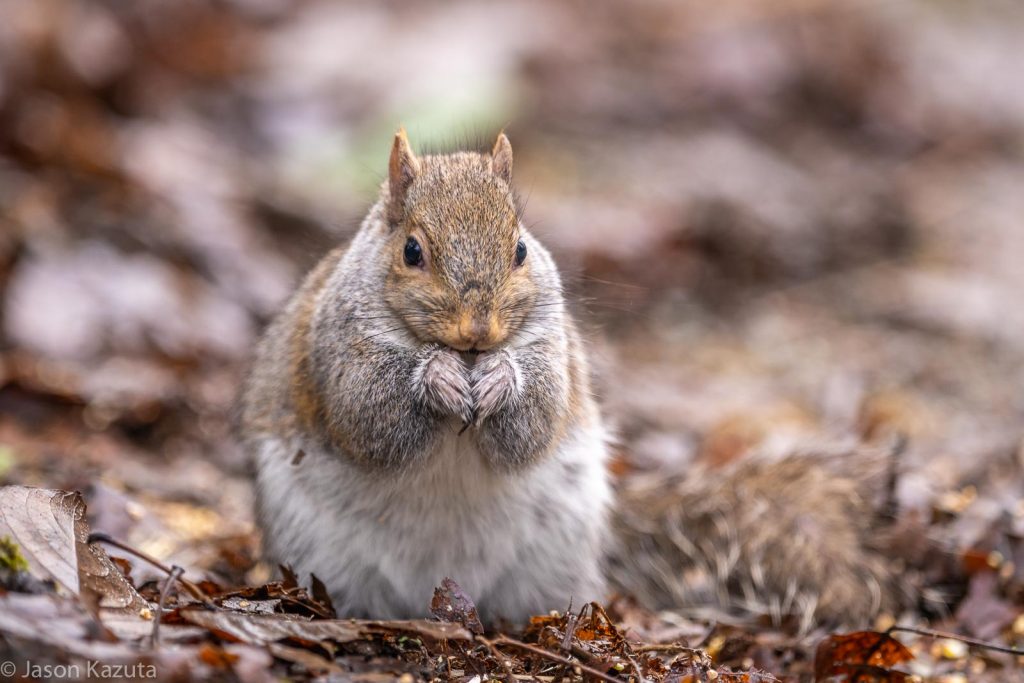 END_OF_DOCUMENT_TOKEN_TO_BE_REPLACED

We have just added the new Nikon Z7 II mirrorless body into our rental pool here at Beau Photo! An update to the Z7 introduced in 2018, the Z7 II...