April 14th 2021.  Wednesday 11:00am. Coal Harbor – Nicole: actually my story starts before this- if you recall last summer I got myself a Seneca 4×5 and put a Kodak folding camera lens on it.  (See previous blog post –   https://www.beauphoto.com/cameras-and-croissants-seneca-kodak-hybrid-4×5-camera/  ) however that lens’ widest aperture, f11, was less than satisfactory for handheld focusing out in the field (sometimes without a dark cloth….!) Eventually I found a replacement, an Aldis-Butcher Anastigmat 4.7in f4.5 (approx 119mm) – this f stop offered far more visibility when focusing on the go.

All the photos below were done on questionable Ilford Delta 100 and stand developed in Blazinal.

April 14th was ideal, as it was sunny (regrettably at this point I only had one film holder).  I took a quick trip over to my favourite water fountain garden in Coal Harbor to shoot. I had planned on focusing from the shade so that I wouldn’t need a dark cloth as this new lens can focus at f4.5, which on T setting lets in enough light to see just enough to focus. Somewhere along the line I got more entrenched in all the steps involved in taking the photo and all together forgot about composition, so this first photo, though it turned out technically sound, is NOT of magnolia blossoms (insert angry emoticon face here) but of a bush of sticks and power box.

The second photo I took was unplanned, it made me regret my lack of color positive, I saw a beautiful sky blue Porsche. B&W would not do it justice.. however I went for it anyway and it turned out great! Both photos turned out well, my future in 4×5 felt promising!

May 2nd 2021. Sunday  11:00am. Dunsmuir st & Richards st – Nicole: By the time I took this camera out again I had borrowed two more film holders, these were lovely and new and for some stupid reason, unlike the first time where I seamlessly loaded film, I had major drama loading these. Not easily deterred I decided to go shoot them anyway and suffer the consequences, which ended up being three blank sheets, blank for various reasons, mostly them falling out or jamming on site. This summer like, every other, I have chosen a few sites around the city to frequent with various cameras. On my list this year was the park across from the church on Dunsmuir and Richards (which much to my GREAT annoyance the city has now ruined my plan by fencing it off for construction…!!) I guess I’m lucky I got there at least once with my 4×5, but I do feel a bit of a redo would have been nice.

There are two shots in the end and I included them both. You can see how I failed to avoid scratching the shit out of them w/ the dark-slide. One turned out pretty good….however the one is heavily under exposed because the sun was suddenly covered by a large thick puffy cloud that I had not accounted for whilst reading my meter seconds before. I did notice what might have been the start of a small light leak on the notch corner of the film/camera however. Determining the cause would take more shooting.

May 9th 2021. Sunday  11:30am. Rhododendron Garden – Nicole: Mothers day was the next time I took the camera out, the weather was stunning, a perfect day for the garden. Loading the holders was marginally easier this time…only one shot got ruined. Taking photos in the garden was far more relaxing than on the street. Turns out I felt most pleased with the one I had the least amount of faith in.

It was my last one, I hand held it in the shade, aperture wide open, it was a lovely garden path, mysterious and flowery. Once again, I felt perhaps colour might have captured it better, but then would it have swirled so magically? It did exactly what I’ve always wanted! The other two shots of the path I took were less exciting, because those were taken with direct sunlight blasting down, this caused my mysterious light leak to shoot up the frame.

Another point worth mentioning, I took a photo of my favorite tree, as I have many times, and this time I missed focus. Well I maybe didn’t miss it per say, I misjudged it- I intended the flowers in the foreground and the tree trunk to be in focus. I failed and need to re-shoot!

For now I plan to go home and examine the point where the bellows connect to the camera, perhaps they’ve come detached, or they are flaking apart, then go shoot more. Perhaps on a less sunny day so I can shoot everything at f4.5.

END_OF_DOCUMENT_TOKEN_TO_BE_REPLACED

Thanks to Nikon Canada’s NPS dept. and our Nikon rep, I recently had the opportunity to spend a week with a Z7 II and a bunch of Z lenses, including... 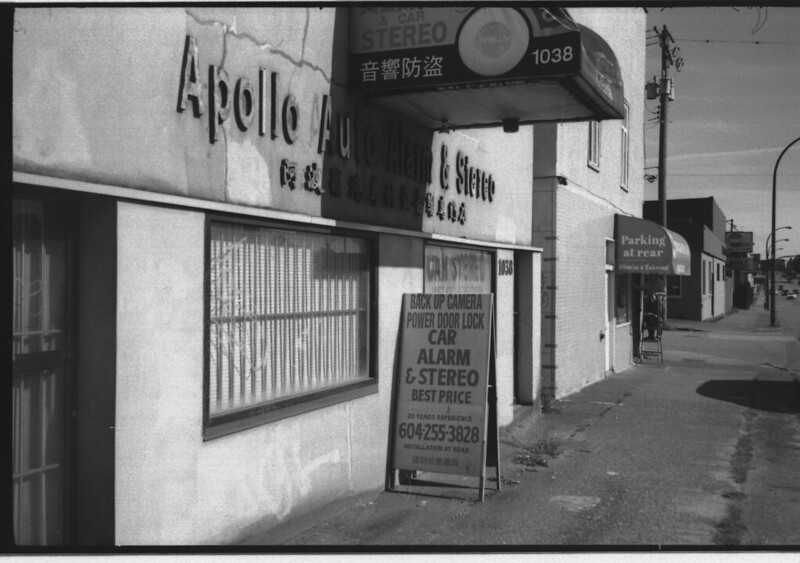 END_OF_DOCUMENT_TOKEN_TO_BE_REPLACED

What? Isn’t Ektar a colour film? How could you develop it with a black and white developer? Fun fact, the base layer of a C-41 film before the colour layers...