Canon has announced the EOS R3, a new professional level mirrorless body that is above the EOS R5 as far as overall shooting performance, albeit with a lower resolution 24 MP sensor. The EOS R3 is intended for photojournalists, sports, or wildlife photographers that value AF performance, shooting speed and ruggedness above absolute resolution for stills or video. Interestingly enough, the “R3” designation might mean that in the future, there will be an even higher performance, higher priced flagship camera likely called an “R1″. From an overall performance standpoint, I think it may be safe to say that the R3 will even outperform Canon’s flagship 1DX Mark III DSLR in most ways…

The new R3 has an all new 24MP “stacked” CMOS, BSI Dual-Pixel AF sensor. While I have not had a chance to shoot with an R3, the new sensor tech likely means cleaner high ISO and better dynamic range than Canon’s previous generation of sensors, and note that the latest sensors in the R5 and R6, as well as the 5D Mark IV, were already big steps forward as far as those specifications go. The new sensor has a very fast readout speed, which means minimal rolling-shutter when shooting video, and minimal distortion when shooting E-shutter sports or wildlife. The E-shutter allows you to capture full 14-bit raw files at up to 30 frames-per-second! There is no EVF blackout when shooting with the E-shutter, so for tracking moving subjects, that will be fantastic. The E-shutter will even allow for flash sync up to 1/180 second where many E-shutters from other brands will not allow for any flash sync whatsoever. 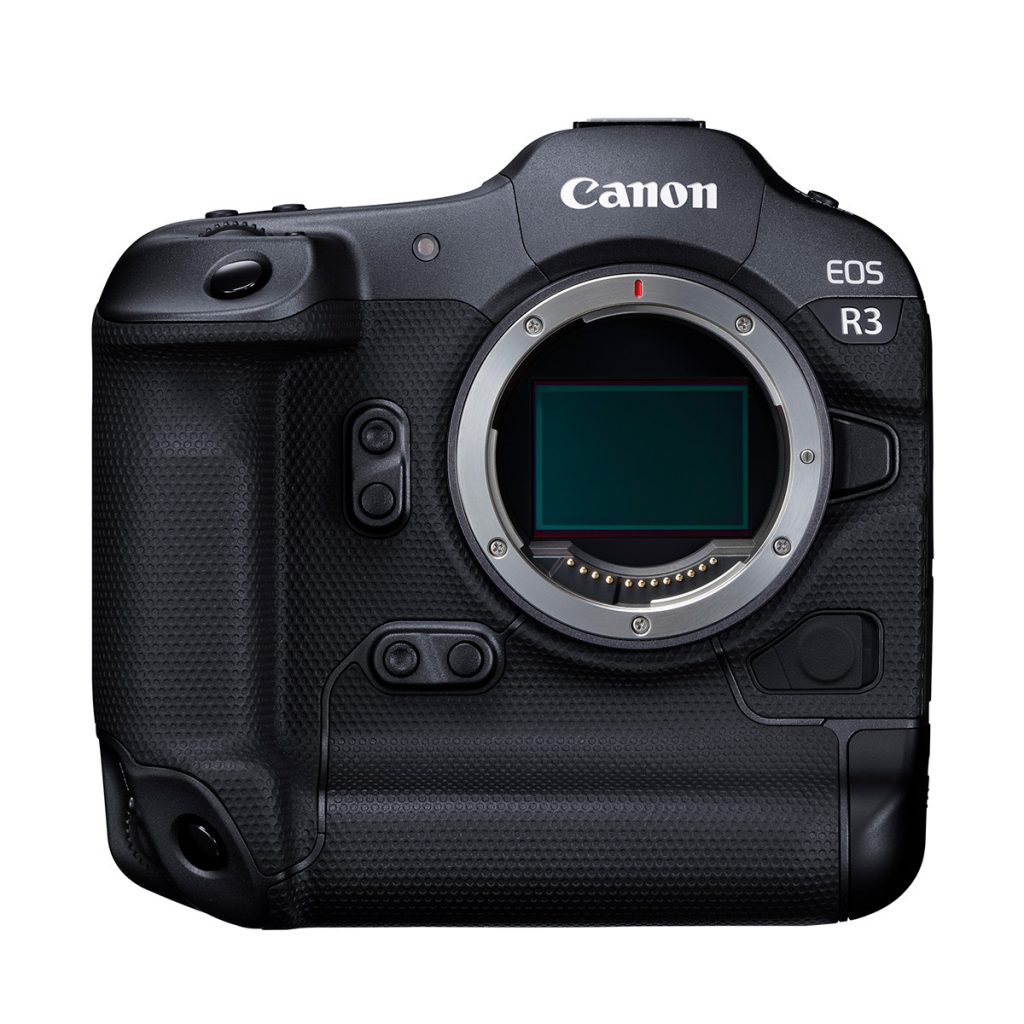 The sensor in the R3 fully reads out in 1/200 second, versus taking 1/60 second in the R5, so rolling shutter effects for stills and video will be over 3 times less, which is a big improvement over the R5. In addition, the R5 only captures 12-bit raw files in electronic shutter mode, so in some cases where captured images need a lot of adjustments, you may get better smoothness and tonality with the R3. Of course the big advantage of the R5 is a 45MP sensor, so it will likely come down to what sorts of photography you are doing. For anything other than sports and action, perhaps the R5 will still be a better choice due to its much higher megapixel sensor? Oh and the ISO range of the new R3 is 100 to 102,400, with the ability to expand by one stop either way.

The EVF in the new R3 is very high resolution with 5.69 million dots, HDR viewing capable, and Canon has resurrected and vastly improved upon an autofocus tech they pioneered, and subsequently abandoned, decades ago: Eye Control AF! First tests of this refreshed technology indicate that it can significantly improve focus acquisition when shooting sports and wildlife, making it easier to choose your intended subject. Used in conjunction with Canon’s exceptionally capable subject and eye detect AF, you get a camera that will likely outperform anything else on the market when it comes to pinpoint accurate AF on your subject. I am very much looking forward to testing out this new tech myself, once I get a chance to shoot with an R3! A very long time ago, I was shooting with an EOS Elan film camera and seriously considered upgrading to an Elan 7E with eye-control AF. In the end, since I was always shooting static subject matter back in the day, I felt the upgrade was not worthwhile for me, so never had more that a brief experience with it when playing with a demo Elan 7E in a camera store. 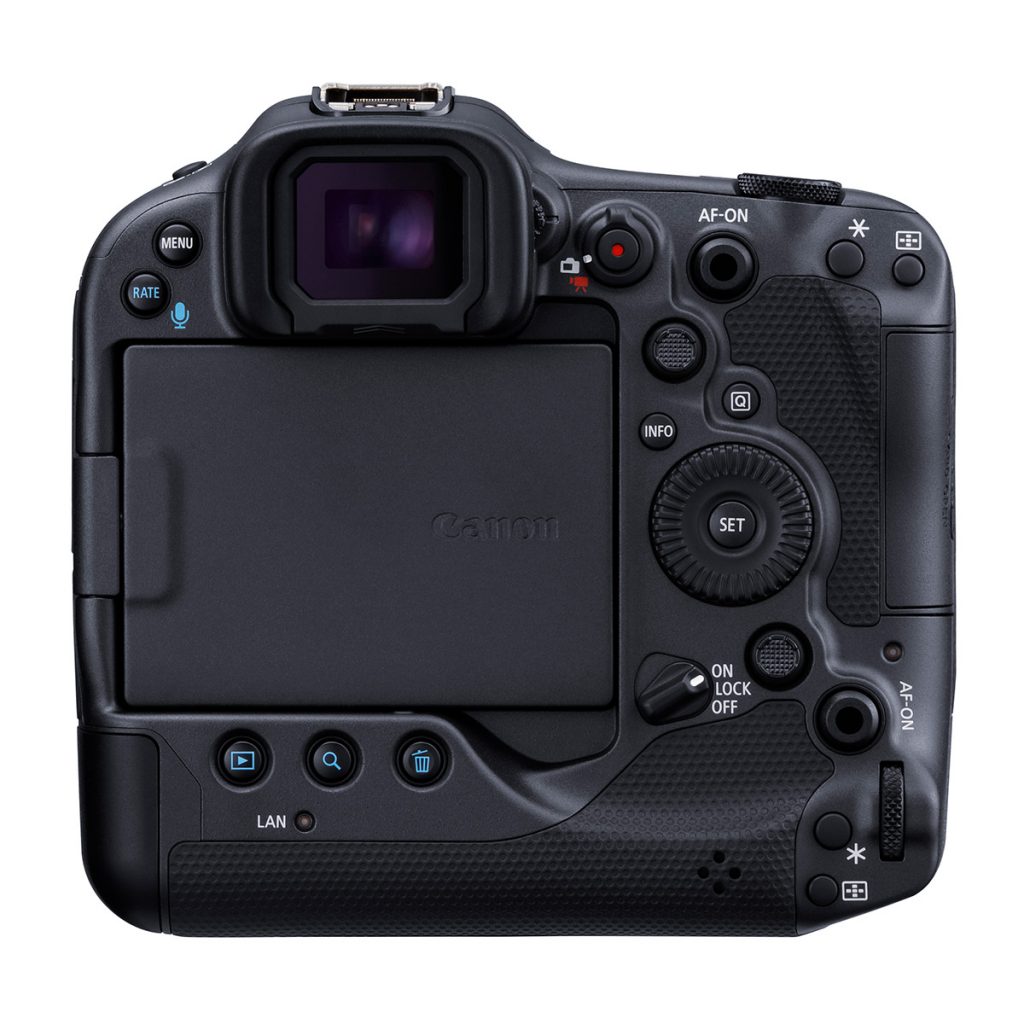 The EOS R3 has multiple AF priority modes for people, animals and motorsports. The motorsports function is new, with the ability to prioritize cars and motorcycles for subject recognition and focus tracking. The faster readout speed of the camera’s sensor should also allow it to perform many more AF calculations each second, and will likely impact how responsive and accurate the AF system ends up being for tracking fast moving subjects. Considering how amazingly capable the R5 is already, the R3 should be truly spectacular. Like the 1DX Mark III, the R3 also has the new AF-ON button “Smart Controllers” which allow you to swipe directly on the AF-ON button itself to nudge the focus point around. I recall this working very well on the 1DX Mark III, so for those skeptical of the eye-control, this will be yet another option for focus point control. Lastly, there are still the little AF-point joystick nubs, which allow for a more conventional way of moving your AF point around. Clearly the EOS R3 has no shortage of AF point control options! Oh and speaking of AF, in can operate down to a very dark EV -7.5 in stills mode (with an f/1.2 lens) and in video mode, down to -4.5 EV. As far as frame rates, the R5 can shoot at 20 fps in E-shutter mode, however due to its rolling shutter issues, there are going to be many instances where you’ll need to switch to the mechanical shutter at “only” 12 fps. However the new R3 can shoot at 30 fps in E-shutter mode, and due to its much faster readout speed, you’ll likely be able to use it for just about anything without worry of rolling shutter issues. Even the moving slit of a mechanical shutter takes roughly 1/250 second to move over the height of the sensor, so there will be very little advantage to switching to a mechanical shutter on the EOS R3. 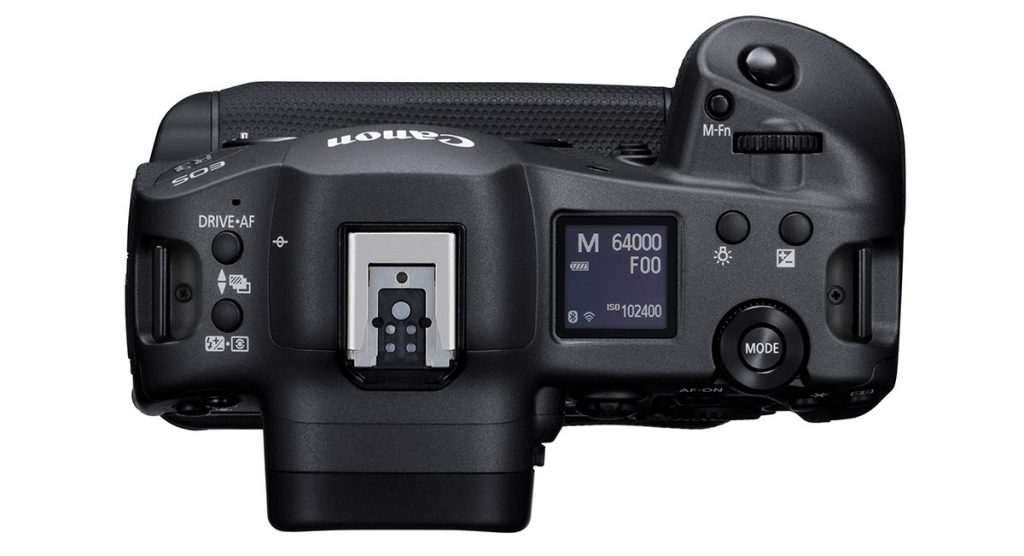 The buffer is decently large in the R3 as well. Worst-case scenario, when shooting at 12 fps with the mechanical shutter and raw plus large HEIC or large JPEG files on a UHS-I SD card, you’ll get 140 to 150 shots before the buffer fills. If shooting only full-size raw files, you’ll get 160 shots with a UHS-I SD card, 290 shots with a UHS-II SD card or over 1,000 shots to a CFexpress card. If shooting at 30 fps with the E-shutter, the buffer drops down to about 150 raw files, no matter what card you are using since the camera will generate data at a far faster rate than even a CFexpress card can swallow in real-time. Buffer recovery time is not something I can find info on, but I imagine it will clear very quickly when using a CFexpress card. Presumably when shooting simultaneously to CFexpress and SD as backup, the buffer size and recovery time will be the same as just using an SD card by itself. I am almost surprised the buffer is not deeper than 140 shots, worst case, since the R3’s resolution isn’t that high, but still, I suspect it will be more than sufficient for most people. There’s got to be a reason to buy an “R1” in the future too! For comparison, the R5 only manages 83 shots at 20 fps in raw with a CFexpress card.

Looking at video specifications, the R3 sensor does not have enough resolution to allow for 8K video, however it can provide 1.5x oversampled 4K video at 60 fps, and Canon says that overheating issues are much less of a concern on the R3 than the R5. Since the R3 also uses the large LP-E19 battery that is used in the 1DX Mark III, the battery life will be vastly superior to the R5, and is actually rated to be more than double at over 700 frames. This will certainly help when shooting video, or if you are using the R3 as a remote stills camera in a high-end sports situation. That said, the 1DX Mark III DSLR manages roughly triple the battery life of the R3 with the same battery, which goes to show what a drain the super fast, constant live sensor readout is on batteries! 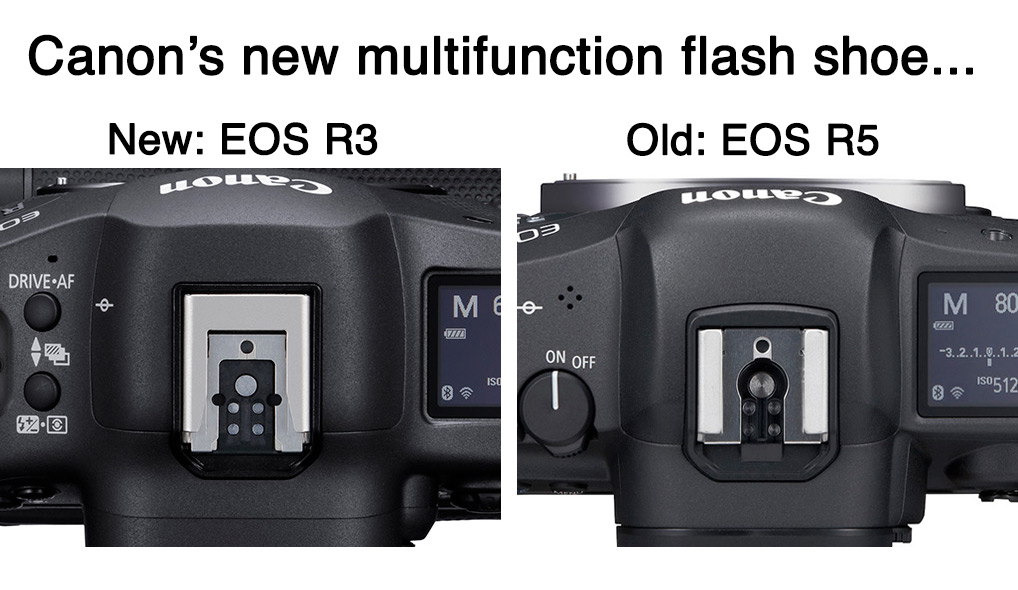 In a move that may annoy some people, Canon has significantly changed the flash shoe of the the EOS R3. From what I can ascertain, flash units such as the 430EX series, or lesser models, can be directly attached to the R3 and will function properly, but without a sealing gasket on those flashes, the R3’s own weather sealing is compromised. Don’t be shooting in inclement weather with one of those flashes! However, in order to attach a pro-series flash with a rubber gasket surrounding its foot, like the 600EX series, you will need an AD-E1 adapter ($59) which itself provides the correct shape to seal against the R3 body, and the correct shape for a 600EX gasket to seal against it.

The new hot-shoe looks very similar to a regular Canon hot-shoe, however it is recessed deeper and has a row of extra contacts at the front, which are just visible on Canon’s product shot of the back of the camera earlier in this posting. These new contacts support a variety of new accessories, including a smartphone adapter/mount that tethers the camera to an Android phone for direct cellular connectivity. Sorry, but no Apple iOS support out of the gate, and it is unclear whether or not there are any plans to support iPhones in the future. You’ll also be able to get a high quality stereo microphone, the DM-E1D at $419, and it is directly powered and interfaced to the camera, not needing any additional cables. There will also be an inexpensive ST-E10 Speedlite radio transmitter at $169, which does what the much more expensive ($359) ST-E3 does. The cost saving comes from the fact that the ST-E10 is smaller with no controls or LCD display. Rather, there is a single “menu” button which calls up a special menu on the R3 itself, allowing you to program all of its functions that way. I suppose that eventually there will be new Canon pro level Speedlite flash units that have the extra row of contacts for smarter interfacing to the EOS R3 body, as well as a directly compatible weather-sealing gasket.

For even more details about the new EOS R3, see Canon website here: Canon EOS R3 Features and also note that their “specifications” section has a ton more information on video recording modes, heat generation guidelines during video capture and much more.

The highly anticipated Canon EOS R3 body is due to start shipping in November sometime at $7,999 and we are taking pre-orders now. If you have any questions, or just want to pre-order, feel free to shoot me an email… 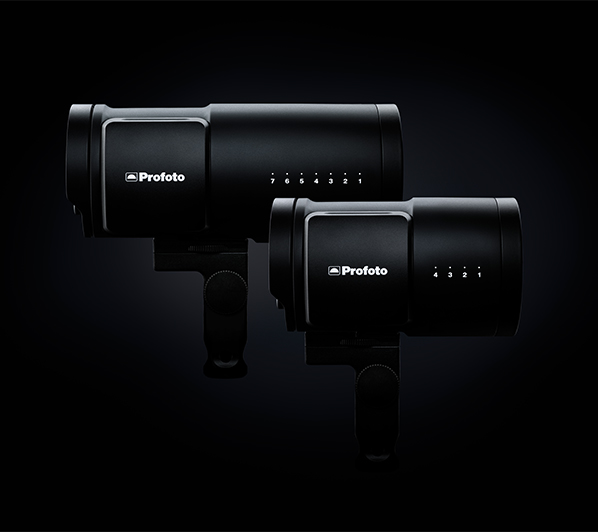 END_OF_DOCUMENT_TOKEN_TO_BE_REPLACED

Profoto has launched their newest and greatest battery powered strobes: the Profoto B10X and B10X Plus 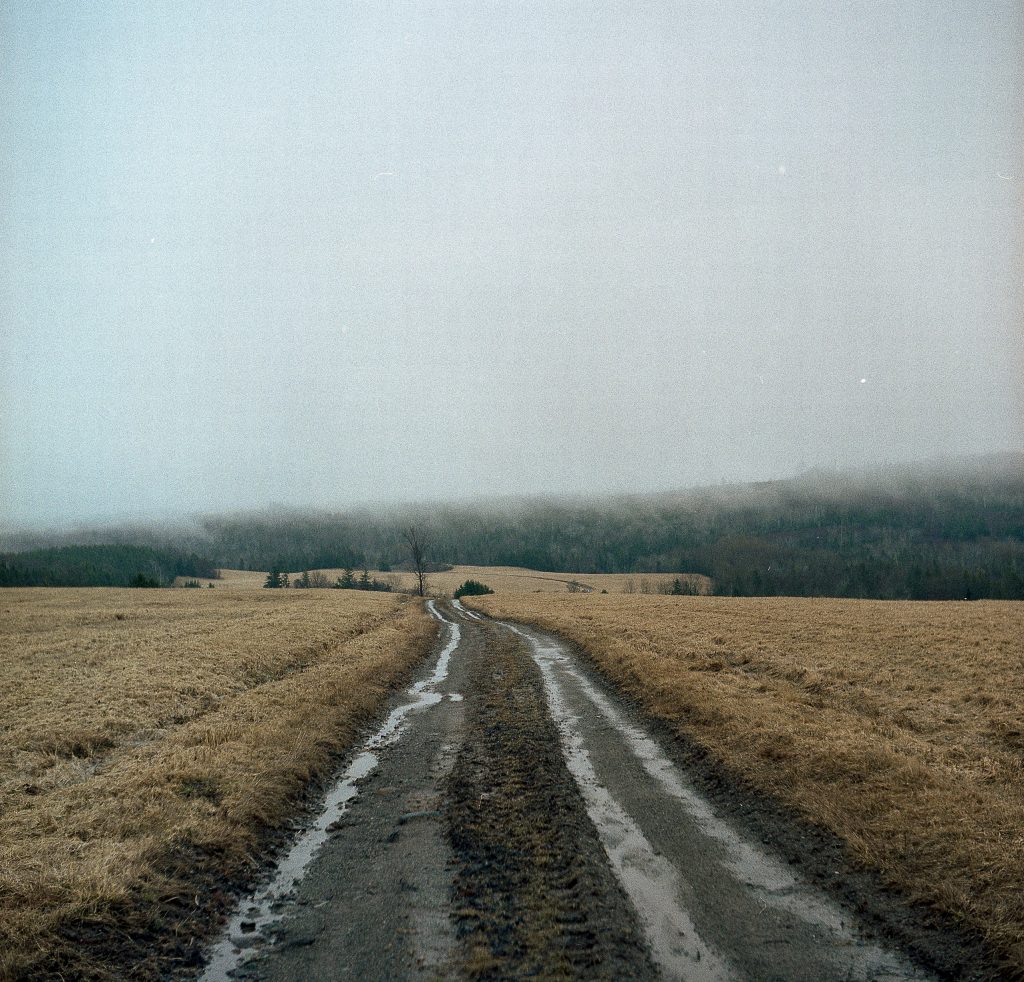 END_OF_DOCUMENT_TOKEN_TO_BE_REPLACED

Shooting Film in the Rain: Tips and Trick

‘Tis the season of rain! As Vancouverites, we’ve all experienced it, lived it, and are all too familiar with it. It’s a fact that a majority of our weather is...