When I first started doing film photography seriously many years ago, I started it with my dad’s old Canon EOS 500 (or Rebel XS to you North Americans). It was a perfectly fine camera, as it provided me with many of the modern amenities that modern day digital cameras do, except of course, it shoots film. A part of me did crave for something a bit more old school and manual, and that craving was fulfilled when I impulsively bought a Canon FTb off a man on the street for $40. Thinking back now, I suspect that it was likely stolen as I found a roll of film still loaded in it, but my naive younger self did not consider this at the time.

For two years, I switched between those two cameras, as a way to get myself used to the incredibly different styles of shooting those two cameras require. While the EOS 500 has autofocus and program functions, the FTb had a broken meter and was completely manual. Those cameras were fine, but they were nothing special. That’s when I started reading more about other cameras and finding myself focusing more on the tangible aspects of the cameras themselves, like the way they feel in my hand, the operation of them and of course, the lenses they have to offer. So over a period of just 4-5 years, I bought and sold quite a few cameras in my quest to find the perfect camera for me.

Part 1: My own discovery of analog cameras and the pursuit of finding the camera for me.

I borrowed a friend’s Nikon FE for a week, and the smooth film winder got me hooked. I got my own a few months later, along with a Nikkor 35m f/2 and used that combo for a year, taking it everywhere with me. But things started to break on a whim, annoyingly enough for me. I got a Canon AE-1, which was just ok but didn’t get me excited to shoot with its shutter priority function and loud mirror. Same went for the Canon A-1. I tried the Pentax MX, Canon EOS 3, Canonet, Yashicamat, Nikon F2, Olympus Stylus, etc, the list goes on.

At this point the most expensive camera I’ve tried had been the EOS 3 and the Nikon F100, both contemporaries and basically the same cameras. Both of them seem to hover around $300 these days. I’ve always heard of more expensive cameras, of course, like the Contax G series, or the Hasselblad 500 series and of course, the Leica M rangefinders. I never understood why anyone would pay thousands of dollars for one other than the fact that many famous photographers used them and they’re kind of rare. Besides, having used fixed lens rangefinders like the Yashica Electro or Canonet, I didn’t think rangefinders were for me. Until my friend lent me his Canon P that he was about to sell.

I took it with me on a trip to Montreal and I shot it a fair bit. It was almost the perfect camera, but it had one major Achilles heel: the cluttered viewfinder! All the framelines are on display at the same time. This one thing was enough to put me off the camera. But I understood that rangefinders with the patch (not where the whole image plane is moving like the fixed lens rangefinders) were the one for me. At which point I thought to myself: could a Leica actually be the answer? 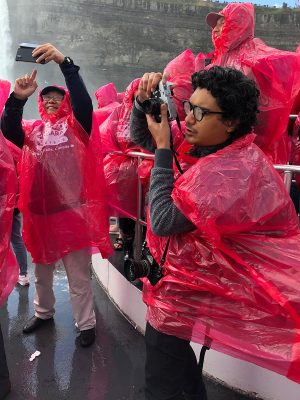 Heading into Niagara Falls with no gear insurance.

I would find that out almost exactly a year later, in Toronto. The same friend who lent me his Canon P lent me his Leica M2. That 10 days I spent in Toronto was the moment it all clicked for me. I understood what people meant when they sung praises for Leica cameras. Incredibly smooth and quiet as well as unobtrusive, it made me feel like the camera was, for the first time in my life, an extension of myself.

The viewfinder is incredibly bright with easy to see framelines, the weight feels nice in the hand, and the lenses incredibly small. I got to use three different lenses, namely the Minolta M-Rokkor 28mm f2.8, the Voigtlander 35mm f2.5 Color Skopar and the Leica 50mm Summicron APSH. That lens especially blew me away, and I understood what people meant by sharpness. Before, I thought it doesn’t make a spectacular difference on film, since it’s all grain anyways unless it’s a particularly bad lens, but the Leica lens showed me otherwise. Now I was hooked on Leica! Oh no! Only problem was, of course, the cost. Sure it’s good, but is it 10, or 50 or a 100 times better than a typical Japanese SLR which you can get for much, much less?

Part II: Why are they so expensive?

Of course, it’s easy to say that the camera shouldn’t dictate whether the photos are great or not. For the longest time I did believe that whatever tool let you do the job should be more than good enough. But as time goes on, as photography becomes about the process just as much as it is about the photos for me, I began to notice how the cameras function helped me get to where I want.

Let’s be honest: part of the allure of these expensive cameras is the history and baggage they come with. Did you know Henri Cartier-Bresson used a Leica? Did you know the Apollo astronauts used Hasselblads on the moon? Hey, Kendall Jenner has a Contax T2! Surely this all means that those cameras are some of the best you can get?

This is the same reason why Pentax K-1000s and Canon AE-1s have seen a slight surge in prices, as every list of great beginner film cameras would mention them. Just 5-10 years ago, it was possible to obtain a Leica M6 body for under $1000. Today they easily go for 2-3 times that. Another camera that’s seen an incredible rise in price is the Olympus Stylus Epic/mju ii. Everyone fawned over the fact that it has a great lens stuck inside a tiny plastic body, that now they go for $300-400. It has become a classic case of demand vs. supply. Of course, this very much coincided with the resurgence of analogue photography, as Kodak Alaris and Ilford have both seen an increase in profits. 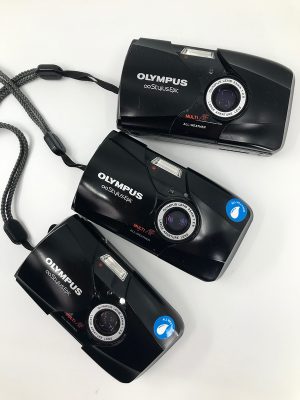 Another victim of the hype machine, the Olympus Stylus Epic.

Film cameras have become hype machines in the same way that limited edition sneakers and designer handbags have become a sort of sub-cultural signifier among those in the know. Owning a high end film camera would somehow put you into the upper echelons of analog photographers. There is something gratifying about carrying around a Leica or Hasselblad, especially when someone recognizes what you have. Never have I been stopped more often than when I was carrying the Leica around, which I thought defeats the purpose of having one over an SLR, which is its supposedly less obtrusive nature. Recently there was a statistical analysis done on an analog photography subforum on reddit called r/analog where it showed that photos taken with a Hasselblad, a Leica or a Contax cameras are more likely to make it to the top of the daily front page than photos taken with any other cameras. There is this perceived notion that an expensive, high end camera equals great photos when of course, this isn’t necessarily true in practice.

It doesn’t help that there is a sub community of Leica owners which permeates an air of pretension over other photographers. Simply read a Ken Rockwell review of any Leica camera or lens. His article titled “The Leicaman” must be one of the biggest example of what the average person must think of Leica owners. White, middle aged and with too much money to make the right decisions with. This is not a club anyone is rushing to be a part of. You can’t help but associate Leicas with retired dentists and lawyers the same way you associate base model Porsche 911s with doctors experiencing a mid-life crisis. These days we see a lot more young people defying those stereotypes but with that comes a new one: that of the slick fashionable faux skater boy/girl with too much money to spare who takes photos of attractive women on Kodak Portra 400.

Part III: So why would you buy one?

I did end up purchasing a Leica M4 with a Summicron 50mm f2. I paid below market price for it, but it was still a lot of money. I sold a lot of cameras that has been lying around my room in disuse. Conveniently some of them had gone up in price since I bought them ages ago.

Why did I buy it? Simple really, it was because I wanted it. It seemed perfect for my style of shooting, and indeed, has become my everyday camera since I got it. Plus, I really did enjoy shooting with it more than my other cameras, before or after. I got a Nikon FM recently and I found myself bored with it! On paper the two seem incredibly similar, being fully mechanical and manual. The FM even has a meter while the M4 doesn’t (although I do have the optional Leicameter MR-4). But next to the M4 the FM seemed big and loud.

It is a big price jump to pay for seemingly trivial and inconsequential features. For most people the FM is the perfect camera. The FE cousin was perfect for me for over a year. The only reasons that you might purchase an expensive film camera is to fulfill such a niche need that other cheaper cameras simply can’t meet or to feel special. In spite of all the negative connotation and the shortcomings, they’re still finely made cameras. I’ve since had opportunities to try out other expensive cameras like the Hasselblad XPan and the Contax G2 and truth to be told, they’re incredibly well made and great cameras to use. It’s partly why they’ve built the reputation they have today. As likely as your Contax T3 is to break, it is also just as likely to produce you great photos for many years to come.

Should you ever purchase one of these expensive cameras? Well, like a lot of things, it depends. Perhaps not as your first camera (although no one should stop you if you’re able to do so), but down the line, 5-10 years into your analog journey, why not? Nicole only just got her Leica M3 as it provided her with a sort of reboot for her experience with analog photography. I did so partly because of the same reasons. Who knows, a few years from now I might get tired of it the same way I got tired of my previous cameras. At the end of the day, you shouldn’t have to justify to yourself why you might want to get one of these expensive film cameras. Its only natural that even analog photographers have something that they would like to aspire to, be it a expensive camera, a publication or an exhibition.

But who knows, maybe your ideal camera is the Nikon FM or Pentax K-1000. If so, keep shooting and go produce some stellar images. 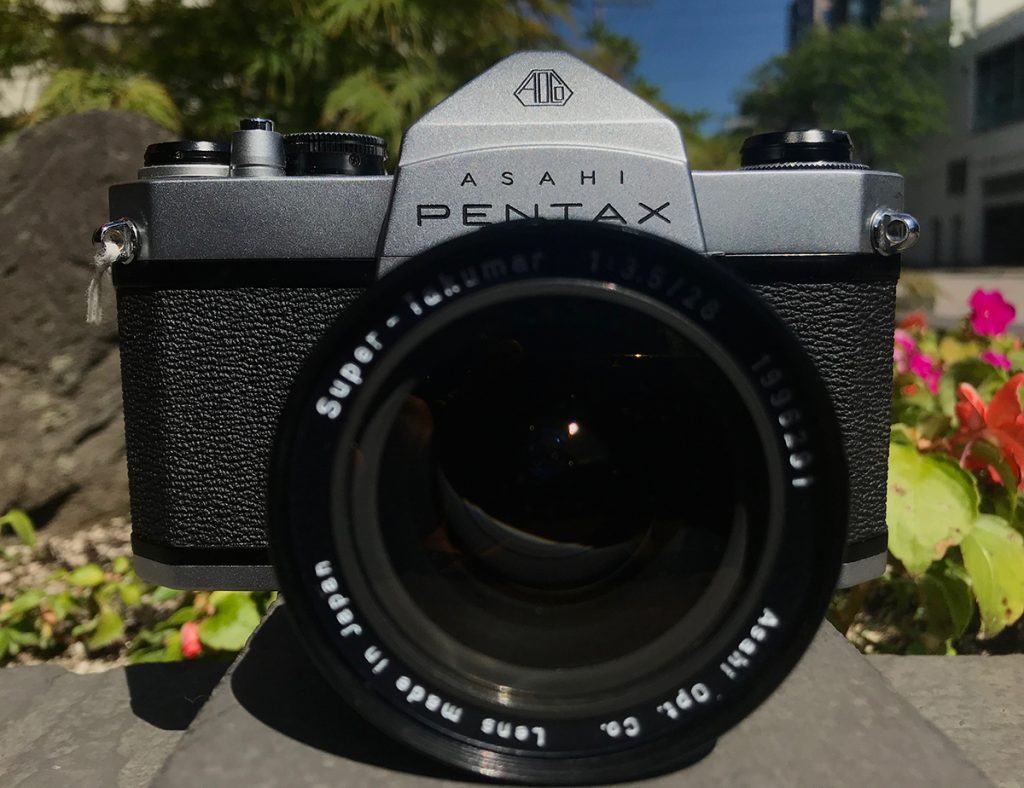 END_OF_DOCUMENT_TOKEN_TO_BE_REPLACED

Who Needs a Meter Anyway?

Now that we’re right in the middle of summer, its a good time to get acquainted with the Sunny 16 rule! You might have heard that term before, but basically...

END_OF_DOCUMENT_TOKEN_TO_BE_REPLACED

One reply on “Expensive film cameras: do they live up to the hype?”